July 24, 2015 – Washington, DC – After raising over $30,000 for humanitarian aid and soccer balls, the Soccer Salam coalition issued an appeal today for $20,000 in humanitarian support for Iraqis fleeing from ISIS-related violence. 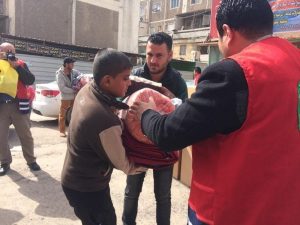 The appeal follows the coalition’s successful airlift of 5 tons of aid earlier this year from Seattle which provided blankets, sleeping bags and soccer balls to more than 1,000 vulnerable families and their children. In June, the coalition, in collaboration with its on-the-ground partner, the Iraq Health Aid Organization (IHAO), delivered aid to 490 families fleeing the violence of ISIS in Anbar. The aid included food, water tanks, medicine, and other essentials – along with soccer balls for the children.

“Phase 3 of our Soccer Salam initiative is focused on providing more food and water as well as investing in public health needs for toilets and showers,” said Erik Gustafson, a veteran of the  1991 Gulf War and the founding director of EPIC, a coalition member. “We have to do all we can to support the people of Iraq who have been through horrific violence and trauma. Yes, the international community must respond with urgency to this need, but we believe in more than talk so we are mobilizing our own people-to-people humanitarian effort.” 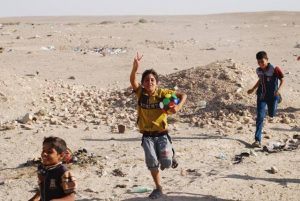 This week, the Soccer Salam team publically launched a Crowdrise fundraiser to support Phase 3 of the project. American veterans, Iraqi expatriates, Soccer fans, and other concerned citizens can learn more about the effort at: www.crowdrise.com/soccersalam

All four charities in the Soccer Salam coalition are led by American veterans working alongside Iraqi expatriates, young people, and others who are invested in supporting the people of Iraq during their hour of need. The Soccer Salam coalition is made possible by donations from citizens from all over the world, veterans, as well as major gifts from the MBC Heritage of Islam Trust, the Khudairi Group, Lake Oswego Rotary, and DynCorp International.

To view the PDF of this press release, click here.