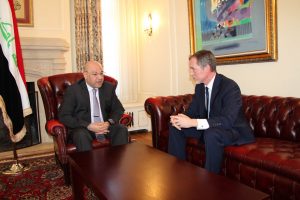 Today, Iraq is facing three simultaneous crises: ongoing insecurity and violence on and off the ISIS battlefield, a serious economic downturn precipitated by falling oil prices, and a humanitarian emergency with 10 million people—nearly a third of the population—in immediate need of assistance.

The good news is that conditions in Iraq are favorable for an effective government, thanks to Prime Minister Haider al-Abadi’s genuine commitment to reforms that improve governance for all Iraqis.

EPIC Director Erik Gustafson spoke with Iraq Ambassador to the United States, H.E. Lukman Faily on the needs of displaced persons in Iraq, government reforms to counter corruption, the role of Americans and the next U.S. President, and the future of Iraqi society.