US Falters in Protecting Iraqi Refugees

Following the outbreak of civil war in Iraq in February 2006, hundreds of thousands of Iraqis fled to Jordan, Syria, Lebanon, Egypt, and Turkey, and more than 1.5 million became displaced within Iraq. Some families relocated to escape an escalation of general violence in their areas, while others fled targeted persecution, including members of religious and ethnic minorities, journalists, scholars, LGBT Iraqis, and those who formerly worked with Americans or other Westerners – whether military, government, or aid agency.

As long as the factors that led to their displacement persist, returning home will never be an option. Instead, these displaced individuals and families must seek refuge elsewhere, and sometimes that can only be found in a foreign country. It cannot be overstated that when vulnerable Iraqis seek resettlement outside Iraq, they do so as a last resort.

Yet despite the continuing large number of Iraqis seeking that last resort and the urgency of so many of their cases, there has been a precipitous drop in the rate of refugee admission to the U.S.  In fact, since 2011, fewer Iraqi refugees have been admitted for resettlement in the US than at any time since 2007.

As you can tell from the numbers alone, that admissions for not only Iraqis, but all refugees, have fallen. Why has there been such a precipitous drop?

Earlier this year I sought that answer at a briefing on “The Plight of At Risk Iraqis” with experts from the Iraqi Refugee Assistance Project, The List Project, The Becket Fund for Religious Liberty, and the US Conference of Catholic Bishops.

All of the panelists came to the same conclusion: applications for refugee resettlement are poorly coordinated, take far too long, and are subject to excessive security clearances that often wrongly disqualify legitimate applicants. They also stressed that the lengthy in-country processing time for each application, at least two years, can be lethal for Iraqis who are at risk of violence and persecution.

You might be asking: Why does it take so long? There are multiple steps to completing the application, not only does each step take months to complete, but they must be completed in a specific order and expire after a designated amount of time, ranging from 12 weeks to 15 months. The execution of a refugee application could be rightfully compared to cooking a Thanksgiving dinner for a large family. Imagine having to plan the hors d’oeuvres,  main course, and dessert and coffee. Except in this instance, if anything burns or cools, you have to start the whole process over again. To me, who once spent 11 hours cooking a Thanksgiving meal for 7 and burned the stuffing beyond recognition, it sounds expensive, time consuming, and nearly impossible.

Furthermore, the process is discouragingly complex. To begin with, an applicant must have a preliminary interview and case screening with UNHCR or another non-governmental refugee agency approved by the U.S. Department of State to submit resettlement referrals. The applicants travel to UNHCR in various satellite cities in Turkey, or the UNHCR offices in Damascus, Amman, or Cairo. The applicants that are approved by UNHCR are referred to the Refugee Coordinator for the region, who then sends the information to the relevant Resettlement Support Center.

Once the applications are in the hands of the local Resettlement Support Center (RSC), every refugee goes through several security checks, all of which look for records of crime, fraud, misconduct, or security concerns in multiple databases throughout different levels of government and in multiple countries.

Because security checks often take several months or longer, many Iraqis are continuously renewing old checks while waiting for others to clear. One expert in refugee and immigration law told me that the system is so faulty some Iraqis have attempted the application 5 or 6 times! Each time they have to start over because their old clearances, medical checks, fingerprint checks, or assurances of aid had expired before their new clearances were processed.

The problem is the parameters of the security checks are not all-encompassing.  There is not one singular check which satisfies all the agencies’ security needs.

Aside from problems between these interdependent agencies, there are still other barriers to successful relocation. To start with, the application status of immediate family members affect one another. That is to say, even an ideal applicant will be put “on hold” if their brother’s application is flagged because of a security concern. Then one of the applicant’s security checks will expire and they will have to renew it, even while “on hold.”

There are also errors and discrepancies in the system because of the pronunciation of names. For example, if one ID says Mohamed and one says Mahmud – that would need two checks because of different pronunciation. Also, every single one of an applicant’s “identity documents” must be authenticated before that person is accepted. Unfortunately, there is no clear definition of what an “identity document” means. It includes, but is not limited to, a passport, driver’s license, and certain legal forms. Because many forms of documentation are acceptable, complications and errors can arise. Refugees living in Syria or Jordan who fled quickly to avoid serious harm often lose their identity documents or are forced to leave them behind. It is nearly impossible for them to get replacements.

Finally, if an applicant has a common name, a large number of hits can come up in their security check. There isn’t enough manpower to individually investigate each one, so the applicant is given a “no decision” status, which leaves the applicant in a kind of bureaucratic black hole. Also, there is no appeal process for any outcome. Applicants can file a Request for Reconsideration, but they must present new facts or show that the officer’s decision making was flawed.

Between November of 2010 and February of  2011 (sources vary), the Department of Homeland Security (DHS) introduced additional security checks, which added stress to an already complicated, fragile system. The effect has been ever-increasing in-country processing time and caused a drastic reduction in the numbers of accepted Iraqi refugees. 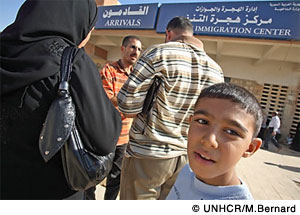 The U.S. refugee protection system is a life-saving program that must be safeguarded. That includes making sure that no one who would ever pose a risk to our national security is ever admitted into the U.S.  However, based on the issues described above, clearly there is significant room for improvement.

As stated at the briefing I attended, refugee advocates argue that, with a few common sense adjustments, the United States can adequately screen for national security concerns while still opening our border to refugees.  Given last year’s introduction of additional security checks, the entire schedule of procedures ought to be revisited and better synchronized to prevent unnecessary delays for individuals who are at risk, and in some cases, in imminent danger. For example, DHS could extend the validity period on certain checks to better reflect average processing time. It is our understanding that the agencies involved are aware of the flaws of the system as it currently stands and are taking corrective action.

In the months to come, we hope to see meaningful results in the form of increased refugee admissions, and by extension, increased refugee protection. So far, numbers are still down, and even though we know that the agencies involved are striving to improve their system and help a greater number of people, we haven’t seen any improvements. You can be sure that we will continue to monitor this situation and report updates as they occur.

For Iraqis, the U.S. has an added moral obligation to do more to help. It was our country that invaded Iraq and contributed to the conditions that forced so many Iraqis to flee their homes.

As the granddaughter of two immigrant families, I know what opportunity and freedom from persecution meant to my grandparents, and so do many of you. The poet Emma Lazarus likewise understood the importance of what America offers to those fleeing persecution when she penned the iconic words: “Give me your tired, your poor/Your huddled masses yearning to breathe free”. That has become a defining value of our nation, and it has made the United States of America into the strong, diverse, and vibrant country that we are today. As a defining value, we must ensure that the United States of America remains a place of refuge for those who are genuinely in need and yearning to be free.

EPIC’s series on the Iraqi displacement crisis continues. Read the full series and tell us what you think. We also welcome your own stories about the plight of displaced and vulnerable Iraqis. Join the conversation on Twitter @enablingpeace (#Iraqis #refugees) and on Facebook at www.facebook.org/epicusa or write me directly at JBiglow@enablingpeace.org.