inside look at Iraq's popular movement for reform

On October 1, 2019, a broad-based protest movement demanding systemic political reform took hold in Iraq. Activists dubbed their movement “Tishreen” from the Arabic word for October. Iraqi security forces and militias backed by Iran responded with lethal force, killing hundreds of protesters and wounding many thousands more. And yet the protests persisted, peacefully forcing a change of government, the passage of a new election law, and the scheduling of early elections — currently set to take place on October 10th.

Two years later, what does the future hold for the Tishreen movement? What power and potential does the movement have for creating positive change? Who are the political actors resisting that change?

To help answer those questions, EPIC is proud to release our new report:

The Long Game: Iraq’s ‘Tishreen’ Movement and the Struggle for Reform.

The report is the product of a year of research that included focus group discussions with Tishreen and Kurdish activists, a nationally representative survey of public opinion, an analysis of social media, and dozens of in-depth interviews. 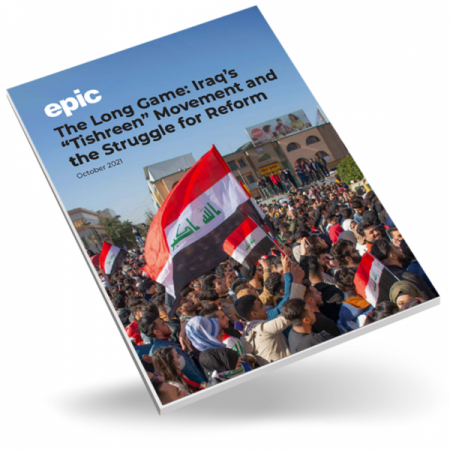 Iraq’s victory over the Islamic State (ISIS) in 2017 has not brought the economic development and prosperity long demanded by ordinary Iraqis and long delayed by recurring conflict since 2003. Instead, Iraqis have watched their government spend billions of dollars on uncontrolled militias, patronage networks of an entrenched political class, an unproductive public sector, and public projects that too often fail due to corruption. By 2018, many Iraqis came to associate the deep-seated corruption and failures of their government with the muhasasa system—the ethno-sectarian power-sharing arrangement that has characterized politics in Iraq since 2003.

Across central and southern Iraq, the rising power of militias that violate the rights of citizens with impunity, the collapse of basic services, and worsening economic conditions have made Iraqis feel less safe in their homes, more destitute in their livelihoods, and disrespected by their government. Meanwhile, in the Kurdistan region, economic setbacks since the September 2017 referendum on independence have highlighted the divisions, opportunism, and incompetence of regional political leaders.

Iraq’s largely boycotted 2018 elections and subsequent government formation have deepened a crisis of confidence in the political system. This was not helped by the government’s failure to appropriately address credible allegations of widespread election fraud, which included a selective voter recount and a mysterious fire at Iraq’s largest storage depot for paper ballots. And after months of making and breaking transactional political alliances, the political actors struck a deal that ignored constitutional requirements in favor of distributing power and resources among themselves, and produced a weak government incapable of improving the lives of ordinary Iraqis.

In October 2019, widespread disaffection with the performance of Adil Abdul-Mahdi’s government boiled over in the form of massive protests across Baghdad and the southern provinces. Iraqis demanded an end to muhasasa-sanctioned corruption and called for jobs, better services, and decent living conditions. Then, under the banner “we want a homeland,” protests coalesced around a new demand: political reform through early elections under a fair electoral system.

These Tishreen (“October”) protests, a continuation of previous antigovernment protests dating back to 2011, were more energetic, diverse, and effective than those of previous movements. The protests

forced Abdul-Mahdi to resign and won a promise from his successor, Mustafa al-Kadhimi, to hold early elections, scheduled for October 2021.

For months the movement filled the streets of major cities with nonviolent protest, art, volunteerism, egalitarianism, and resilience. By remaining nonsectarian and cultivating a new, inclusive Iraqi identity, these protests revealed a new face of Iraq, challenging stereotypes that had been accumulating since 2003.

Faced with this unprecedented challenge, government forces and their allied militias used excessive violence to save the status quo. Iran encouraged and aided the suppression of Iraqi protests to protect its allies and its interests in Iraq. Violence that killed hundreds of protesters on the streets, targeted killings of prominent activists, and forced disappearances, abductions, and torture have all taken a heavy toll on the pro-reform movement, eliminating some of its leading figures and forcing others into exile.

While violence, the pandemic, economic pressure, and a loss of momentum reduced public manifestations of the protest movement since early 2020, these factors have not completely suppressed it. The movement remained active and capable of

We look over our shoulders if we criticize [the government] too harshly or call out militia leaders or Muqtada al-Sadr.
Female activist, central Iraq
Author's interview

mobilizing sizable protests in 2021, with the added focus of pursuing accountability for violence against fellow activists. The movement still enjoys wide support from the Iraqi public. In a nationally representative survey of Iraqis conducted by EPIC in June of this year, more than 70 percent of respondents said that they support the protesters and 31 percent said that they had participated in at least one protest since October 2019. The support is high even in the Kurdistan region, which had its own anti-government protests in 2017 and 2020, reflecting widespread dissatisfaction with the ruling parties’ corruption and mismanagement, and even their very legitimacy to rule. Similar to the Tishreen protests in Baghdad and the Iraqi south, the focus of protests in Kurdistan had turned from demands for jobs to demands for systemic change and a replacement of the political class.

Within Iraq’s continuing pro-reform movement, there is remarkable determination and sophistication. Through focus group discussions and interviews, the authors of this report met activists who are realistic in their expectations about the time, resources, and sustained efforts required to move a reform agenda forward. Building on the movement’s experience and its successes, there is also widespread recognition of the importance of maintaining the moral high ground, educating the public and growing its support, advocating for human rights both in Iraq and with the international community, and protecting the movement’s inclusive national identity.

The worsening economic dysfunction and accelerating rise in unemployment have been at the center of Iraqis’ grievances, and make the need for reforms all the more urgent. To create enough jobs for the country’s growing youth population (with roughly 500,000 young people entering the workforce each year), Iraq will need leaders who can transcend the previously established corrupt, transactional nature of Iraqi politics, and rally sufficient parliamentary and public support for difficult yet necessary political and economic reforms. Among the leading Tishreen activists interviewed for this report, there was a grim acknowledgement that the struggle for reform would likely require a sustained effort across multiple election cycles.

To that end, the Tishreen movement established several political parties in 2021, pursuing organized means for formal political action. Some of these parties, like the Imtidad (“Reach”) Movement, the Fao-Zakho Assembly, and the Nazil Akhoth Haqqi (“Coming to Take My Rights”) Movement, have

If the electoral process fails to produce new faces or create a path for political reforms, then there will be a new Tishreen, maybe something bigger.
Male activist, southern Iraq
Focus group discussion

candidates running for election. These groups may have a chance to gradually reshape politics in Iraq. EPIC’s survey results indicate that while nearly 65 percent of eligible voters were undecided or planning to not vote, Tishreen candidates held an overwhelming lead among decided voters. In fact, among respondents who described themselves as decided voters, 7 out of 10 were prepared to vote for candidates representing the protest movement.

However, at a moment when the movement enjoys strong public support, the activists still face a major dilemma. Ongoing violence and the abuse of power by established parties and their allied militias have pushed some Tishreen activists, including the prominent al-Bayt al-Watani (the National House) group, to boycott the very same early elections previously demanded by the movement as a whole. In their view, they do not want to bestow legitimacy on what they expect will be another flawed and fraudulent process.

With all these considerations in mind, this report explores a number of different scenarios that could emerge during and after the October 2021 election.

An inhospitable electoral environment and low voter turnout would suggest that pro-reform candidates may make minimal gains in parliament, while traditional and militia-backed parties retain overall control. The latter have obstructed reform initiatives in the past and show no sign of changing their behavior regardless of the growing cost to Iraq’s sovereignty, security, and development. Yet even if the movement is able to gain only a foothold in parliament, strong public pressure could create opportunities for its elected leaders to champion urgently needed reforms from within.

Indeed, with more than 82 percent of Iraqis stating that fighting corruption is a top priority, any
continuation of “business as usual” in the next government would likely provoke renewed mass
protests. Government and militias may attempt to suppress the movement with brute force, leading to further rights violations, instability, and conflict. Even then, the movement’s demonstrated resilience, determination, and broad public support may enable it to withstand the violence and continue the struggle to bring about change.

As a key part of Iraq’s political scene that, by all indications, remains active and no less determined than its opponents, the pro-reform movement warrants further study. Such study could further contribute to an understanding of how change may increasingly come to Iraq from the bottom up rather, than from the top down, through the agency of the Iraqi people and the assertion of their sovereignty.

The EPIC research team presents some of the report’s key findings, followed by a critique from respondent Marsin Alshamari of the Belfer Center for Science and International Affairs with the Harvard Kennedy School. EPIC Board Member Bilal Wahab moderated the discussion and Q&A. 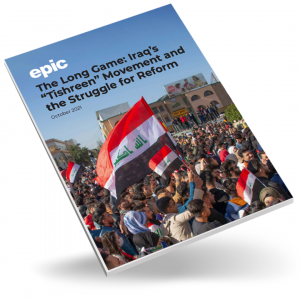 Get a rare inside look at Iraq’s massive social movement for change. Download the full report. 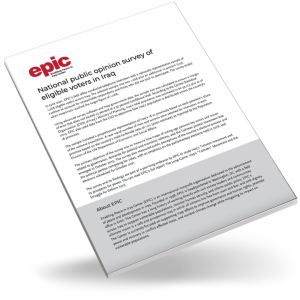