The Refugee Crisis: A Growing Concern for Iraq and the International Community 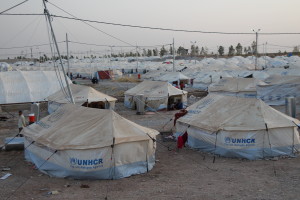 The plight of refugees and internally displaced persons (IDPs) in Iraq is a growing concern for both humanitarian agencies and the Iraqi government. The UNHCR appeal on Iraq for 2014 describes these concerns in great details.  Though Iraq is not a signatory to the 1951 Refugee Convention, nor the 1967 Protocol, the country has been host to many refugees in the past and present, from Palestine, Iran, Turkey, and recently Syria. Due to the great influx of refugees, a new law has been drafted by the government and is currently pending approval by Parliament and the Shura Council.

The constant sectarian violence within Iraq is further stressed by the war in Syria, which is forcing many Syrians to seek refuge and many Iraqis to repatriate. As specified by current data, it is estimated that Iraq will have 500,000 Syrian refugees and 1 million IDPs by the end of this year. With local infrastructure and services in the country still struggling to meet the demands of Iraqi residents, the refugees add more strain to these essential facilities. Given this burden, the UNHCR is seeking to ameliorate vulnerable populations situated in remote locations in Iraq. Within the last year, the Iraqi government has increased their financial contributions to UNHCR activities in the Kurdistan region, Al Qa’im and the Anbar governorate.

According to the UNHCR 2014-2015 Global Appeal on Iraq, the most concerning issues to be addressed in the coming year will be, “. . . advocacy, legal and protection interventions, basic assistance and support to IDPs in newly and protracted displacement situations, as well as capacity building of governmental and national non-governmental organization (NGO) partners”.  Capacity building for local partners is one of the main approaches that will alleviate many of the current response issues of the refugee situation. The UNHCR will continually focus on community inclusion and enabling local partners to ensure the sustainability of programs. 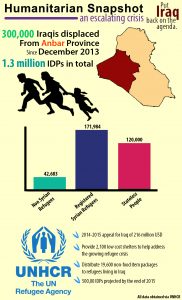 The organization’s budget for the refugee crisis has increased from 239 million USD in 2010 to 297.3 million in 2013. This is in response to the mass flow of refugees into Iraq as a result of the war in Syria. However, the budget for this coming year will be well below that of 2010, at 216 million, given a decrease in need for shelter construction. Most of the resources will be used for projects entailing registration of refugees, resettlement, integration and basic needs such as shelter, food, and water. A very small portion of the budget will be used for stateless programs, including identification of and services for these individuals. The remaining funds will be allocated to IDP and reintegration projects.

These funds will be used to address many essential services and activities within Iraq in the coming year. Although the need for shelter in 2014 is not projected to be as urgent, UNHCR is estimated to provide 2,100 low cost shelters. They will also distribute 19,600 non-food item packages and focus on livelihood improvement by enabling and empowering communities. One method of implementation involves spreading awareness of sexual and gender based violence (SGBV), in particular for IDPs who lack proper lawful protection, in hopes of increasing prevention and response. The restoration of an inundated refugee registration system is currently under way and is expected for completion this year.

The refugee crisis in Iraq is a growing concern for the UNHCR and threatens stability in the country as well as the region. While peace talks in Geneva strive for a solution to the Syrian conflict, sectarian violence and an insatiable refugee population in Iraq furnish an environment of volatility, demanding urgent attention from the international community.

For more information about IDPs in Iraq, click here.