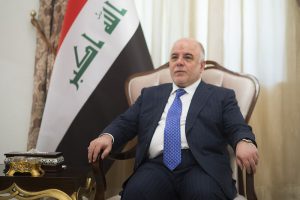 In a hearing before the House Foreign Affairs Committee on February 25, 2015, Secretary of State John Kerry offered his remarks on Iraq’s new central government, led by Prime Minister Haider al-Abadi:

Part of the problem in Iraq was the sectarianism that the former prime minister had embraced, which was dividing his nation and creating a military that was incompetent. And we saw that in the context of Mosul. So we wanted to make sure that we had a government that really represented people and was going to reform and move in a different direction. And we worked at it and we got it. We have it today. Is it perfect? No. But is it moving in the right direction? You bet it is.

Is John Kerry correct? How much has actually changed in Iraq under the leadership of Abadi?

It has been eight months since he was named Iraq’s new prime minister, pushing Nouri al-Maliki out of power after eight years of mismanagement, corruption, and dysfunction. Abadi’s administration faces numerous challenges, including the fight against the Islamic State of Iraq and al-Sham (ISIS) and a financial crisis that has been exacerbated by the steep drop in oil prices over the past several months. While defeating ISIS and reclaiming large swaths of Iraqi territory is the central government’s ultimate objective, there are a number of other issues that must be tackled simultaneously.

Abadi’s position as prime minister was never guaranteed; nor was he being considered for the position in the months leading up to Nouri al-Maliki’s removal from power. Previously, as the spokesman for Maliki’s Islamic Dawa Party, he toed the party line. Nevertheless, he seemed to recognize the need for a change in Iraq’s central government when he sat down for an interview with Mehdi Hasan of the Huffington Post in late June 2014, just after the fall of Mosul. In that interview he set the stage for increased U.S. military involvement in Iraq and discussed the shortcomings of the central government, focusing specifically on the divide between Sunnis and Shias.

He reiterated these concerns a month later after being named the PM-designate, but with his “reputation for skilled diplomacy” it became clear that Abadi had “a much better chance of forming a national-unity government than his predecessor”. A key point in the transfer of power, Iraqi ambassador to the United States Lukman Faily stated in a discussion on February 3, 2015 at the George Washington University, was that it occurred peacefully. There was tremendous pressure from foreign powers, specifically the United States and Iran, and from powerful domestic actors, including Grand Ayatollah Ali al-Sistani, to breathe change into Iraq’s central government. As a result, Maliki stepped aside and allowed Abadi to take over without much fanfare or opposition.

The government formed quickly following his nomination by the president as the PM-designate and his approval by the Council of Representatives (CoR) to be the next prime minister. By early September Abadi had appointed three deputy prime ministers, one from each of the three major groups with a stake in Iraqi politics: the Sunnis, the Shia, and the Kurds. However, tensions in the government remained high and Abadi deferred appointments for the ministers of Defense, the Interior, and Finance. His initial objectives were clear: hold the country together and build trust between the major political groups. The Sunnis continued to push for changes in the security forces and in the de-Ba’athification law and the Iraqi Kurds aimed for resolutions to the oil and budget disputes between Baghdad and Erbil.

By late October 2014, Abadi had made noticeable improvements in governance. He split the remaining cabinet positions three ways: Defense went to the Sunnis, a significant appointment given Sunni demands for more representation in the security forces, Interior went to the Shia, and Finance went to the Kurds, also significant given Kurdish demands for resolutions to the oil and budget disputes. While these appointments were made as a result of necessary political agreements between Iraq’s various political groups, they nevertheless represented a shift in power sharing arrangements that were lacking under Maliki, who had completely consolidated power in his own hands as prime minister. Abadi also appeared before the CoR three times in two months and took steps to address corruption by removing thousands of “ghost soldiers” from the Iraqi security force’s own payroll and sacking several generals at the top of the chain of command.

With respect to the oil and budget disputes between Baghdad and Erbil, Inside Iraqi Politics reported that a resolution had passed through the Council of Ministers in late December 2014. That resolution called for the Kurdistan Regional Government (KRG) to pay revenues for at least 250,000 barrels per day (bpd) from the KRG and 300,000 bpd from Kirkuk to the State Organization for the Marketing of Oil (SOMO). In addition, any extra revenues were to pass into the state treasury. In return, the KRG would receive 17% of the federal budget, including a “per capita portion of the army’s budget” for the Iraqi Kurdish Peshmerga. However, independent exports outside of the state treasury by the KRG led Baghdad to withhold payments to the regional government. A resolution to the disputes had not been reached as of early April and without such a resolution the relationship between Baghdad and Erbil will be rocky. However, Abadi continues to be engaged in negotiations with the KRG, as evidenced by his recent visit to Erbil.

Despite these efforts, Abadi isn’t without his detractors. In an October 2014 Reuters report, Sheikh Naeem al Ga’oud of the Albu Nimir tribe in Anbar province stated “all we got out of the meeting with Abadi was promises”. His comments reveal the difficulties of governing Iraq. Although Abadi is keen to improve the relationship between Iraq’s political groups, sectarian tensions continue to divide the country. However, Abadi’s continued engagement with these political groups sets him apart from Maliki. It has been a slow and grueling reconciliation process, but progress is being made, if only among the general population.

According to a recently released report from Gallup and the Broadcasting Board of Governors, confidence among Iraqis and Iraqi Kurds in the how the prime minister is handling his job is up significantly in ISIS-controlled areas and in Iraqi Kurdistan. When the poll was first taken in September 2013, with Nouri al-Maliki still firmly entrenched in power, the prime minister’s approval ratings in ISIS-controlled areas were at 42%. In Iraqi Kurdistan, they were at 13%. By May 2014, those ratings had fallen to 30% and 12%, respectively. In the seven months to December, and after only four months with Abadi as prime minister, over 69% of Iraqis in ISIS-controlled areas approved of the way he was handling his job. In Iraqi Kurdistan, approval ratings had shifted up to 53%. This dramatic turn around in public opinion was undoubtedly driven by Abadi’s concerted efforts to move away from the legacy of his predecessor.

Iraq’s problems have continued to land on Abadi’s desk one after the other. Sunnis have continued to push for the establishment of a National Guard, similar to that of the Sahwa during the U.S. surge in 2007 and 2008. As the fight against ISIS has moved farther north, Iranian-backed Popular Mobilization units (PMUs) have begun to operate in predominantly Sunni areas, most recently in Diyala and Salah al-Din provinces. The lack of government oversight has placed stress on the local populations in these areas, which now feel squeezed between ISIS militants and the PMUs. In addition, ISIS’s continued presence in northern and western Iraq has been a daily reminder of the security challenges that Abadi and the central government face.

In late January, Iraqi security forces made small gains in the fight against ISIS. Large parts of Diyala were cleared of militants, but retribution attacks between members of the local population have continued well into April and security forces are struggling to ease the situation in the province. On February 3, the Council of Ministers approved two important draft laws critical to bringing Sunnis into the central government and then forwarded the proposals to the CoR for a vote. However, the laws remain controversial and are currently being reviewed by Iraq’s Federal Supreme Court for their constitutionality and discussed among Iraq’s political groups. The establishment of a National Guard would channel Sunnis into the fight against ISIS and amendments to the central government’s de-Ba’athification policy would allow many former Ba’ath party members to re-enter government service, although several political groups oppose both of these measures. On March 31, joint security forces retook control of Tikrit and most areas of Salah al-Din province from ISIS in a large-scale offensive.

However, this offensive only highlighted the central government’s inability to regulate and control the PMUs, which continue to operate in Sunni areas without much oversight. A massacre of 70 civilians in Muqdadiya in January 2015 illustrates the dilemma faced by local populations that are caught between ISIS militants and PMUs. More recently, looting in Tikrit following the offensive to retake the city from the control of ISIS forced PMUs out of the city, although it is not clear if the PMUs or local forces were responsible for the incidents. The Council of Ministers has responded by announcing that the PMUs will be placed be under the command of the prime minister, but it is unlikely that PMUs will surrender their autonomy to the central government. All this highlights the fact that mistrust pervades among Iraqis and there is fear of retribution on all sides as more Iraqi territory is cleared of ISIS. These incidents are reflective of the challenges that Abadi faces in controlling intra-tribal and inter-tribal rivalries in areas under ISIS control and in areas that have been recently cleared of ISIS militants. In the short run, his ability to reign in the PMUs, rebuild trust between Iraqis, and include tribes in local, provincial, and the central government is critical to the success of the campaign against ISIS.

LOOKING TO THE FUTURE

The fractured security situation reveals a larger struggle for foreign power influence in Iraq. The United States and Iran can both play a role in the country’s future, but striking a balance between cooperation and confrontation will be difficult. Abadi must set the course for Iraq and only accept help when his government deems necessary. A recent boycott by Iranian-backed PMUs participating in the Tikrit offensive following Abadi’s decision to allow the International Coalition to perform airstrikes in support of joint security forces reveals the schism between the central government and foreign powers acting in support of its efforts to defeat ISIS. Dictating the terms of a relationship with the United States or Iran is a priority in the coming months and Abadi’s failure to unify the government’s position could continue to threaten the stability of Iraq.

In summary, Abadi’s first eight months as prime minister of Iraq have been filled with enormous challenges. They have also been characterized by improved leadership and trust-building efforts. The elites of Iraq have stabilized politics, but the next challenge will be to restore the trust of the Iraqi people in the central government’s ability to govern fairly and effectively. The fractures that have emerged in Iraqi society as a result of Nouri al-Maliki’s eight years of defective governance and the more recent campaign against ISIS do not have to translate into hopelessness for Iraq. Abadi faces the challenge of rebuilding his country in the face of an enormous humanitarian crisis, with over 3.6 million displaced Iraqis spread across various provinces. The prime minister is in a unique position to redefine Iraqi society as the fight against ISIS intensifies and to reassert the commitment of the central government to building a respectful political arena, developing the economy and rebuilding the country, and supporting the unity of the Iraqi people.