Reports on the Use of Chemical Weapons by ISIS 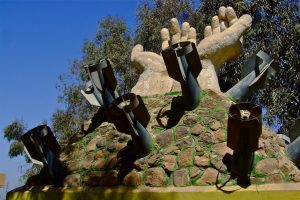 The Iraq Security and Humanitarian Monitor (ISHM) reports increasingly frequent and deadly incidents of the use of chemical weapons by ISIS against civilian populations. Recent attacks in western Mosul are being actively investigated by the Iraqi Government in cooperation with international and humanitarian partners. Below is a compilation of selections from recent ISHM reports that chronicle ISIS’s use of chemical weapons.

In an opinion piece on the 28th anniversary of chemical weapons attacks carried out by Saddam Hussein’s Baathist regime on Kurds in Halabja (near Iraq’s border with Iran), chemical weapons advisor Hamish de Bretton-Gordon compares that incident with ISIS’s current intentions and suggests next steps for reducing the chemical weapons threat.

On March 28, ISIS militants located on the border of Diyala and Salah ad-Din Provinces launched six mortars at the village of Mubarak al-Farhan in the Mutibija area. Uday al-Khaddran, the Mayor of nearby Khalis (15 kilometers north of Baquba), stated that the mortars injured one child and caused “cases of suffocation among some civilians as a result of strange gases.” The next day, Khaddran asserted that “all available evidence indicates that the missile was carrying a (heavily toxic) gas chlorine,” and that requests for medical teams had not been answered.

On March 3, 2017, The World Health Organization (WHO) reported that it had activated emergency plans in place to handle chemical weapons injuries, after receiving 12 patients from east Mosul who exhibited symptoms potentially stemming from exposure to chemical weapons. The WHO said in a statement that, “four patients are showing severe signs associated with exposure to a blister agent.” Robert Mardini, Middle East Coordinator for the Red Cross, stated that the patients were displaying symptoms consistent with those of a “blistering chemical agent,” but no aid organizations have explicitly stated that chemical attacks have been carried out. The BBC reported that the injuries resulted from two separate mortar attacks after which victims complained of a foul smell in the air. Data from IHS Markit suggests that ISIS has used chemical weapons at least 52 times since 2014.

On September 16, 2016, security forces in the Kirkuk Province reported that a U.S.-led international coalition airstrike targeted and destroyed a chemical weapons factory that was manufacturing missiles carrying mustard and chlorine gas in Zab, 75 kilometers southwest of Kirkuk. The same report indicated that there were also strikes conducted by the U.S.-led international coalition against targets in Rashad and Riyadh, 45 kilometers southwest of Kirkuk, killing 15 Islamic State of Iraq and al-Sham (ISIS) militants and wounded seven others.

On September 21, 2016, senior U.S. defense officials reported that a rocket or a mortar shell was fired into a perimeter where U.S. personnel were deployed that contained a “mustard agent” at a “logistical hub” known as “Q-West” near Qayyarah, 30 kilometers north of Sharqat. No U.S personnel were injured in the attack and the weapon was described as “crude and ineffective.” ISIS has used weapons with chemical agents in it before against Iraqi civilians and Peshmerga forces.

On April 30, 2016, ISIS militants bombarded Iraqi Kurdish Peshmerga positions with 50 mortar shells laced with chemicals in the town of Khazar, 40 kilometers northeast of Mosul. The bombardment caused an unknown number of Peshmerga deaths by suffocation.

On May 2, 2016, ISIS fired rockets filled with an unidentified toxic gas on Turkmen PMU forces, injuring 8 men. The attack took place in al-Bashir, south of the city of Kirkuk, where efforts are underway to completely clear the area of ISIS militants.

On March 8, 2016, ISIS launched 37 Katyusha rockets loaded with what is thought to be chlorine gas into the center of Taza, 25 kilometers south of Kirkuk. There were “many cases” of suffocation amongst civilians caused by these rockets.

On October 8, 2015, the Ministry of Peshmerga confirmed that ISIS had fired approximately 35 shells containing mustard gas on Peshmerga forces during the fighting for Makhmour and al-Kwer. Mustard gas is a chemical weapon prohibited by the Geneva Protocol of 1925 and the Chemical Weapons Convention, ratified in 1993. The Ministry did not disclose if there were any casualties from this incident, and requested that allies send them protective gear in the event of another attack

On August 25, 2015, the Mosul Brigades attacked a plant in the Valley Ekab industrial area located in Mosul, which was allegedly used by ISIS to manufacture hundreds of IEDs. The group destroyed the weapons lab and killed many ISIS members inside of it, however “the lab bombing caused dense leaks of Sulfur Mustard, commonly known as Mustard gas, to spread in the air.” Reports by Patriotic Union of Kurdistan (PUK) official Ghias Surja indicate that dozens of people around the plant had to be taken to hospitals in Mosul and hundreds of families near the plant were forced to flee the area for fear of exposure.

On August 12, 2015, Ismail Qader, an officer in the Peshmerga forces, stated that the ISIS fired dozens of rockets allegedly filled with chemical substances on Peshmerga fighters near Makhmor. Experts are conducting a survey to determine whether the weapons contained chemicals.

Derived from firsthand accounts and Iraq-based Arabic and Kurdish news sources, the Iraq Security and Humanitarian Monitor is a free publication of the Education for Peace in Iraq Center.

Subscribe to our weekly Iraq Security and Humanitarian Monitor (ISHM) and have the latest developments in Iraq sent straight to your inbox every week.