#27: What happens to Mosul after ISIS? 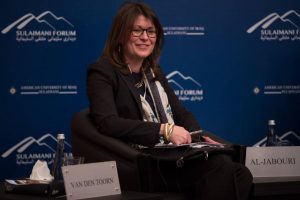 Since June 2014, ISIS militants have occupied Mosul, Iraq’s second largest city and the capital of the Ninewa Province. As Iraqi Security Forces, Kurdish Peshmerga, a U.S.-led coalition, and their allies prepare to clear ISIS from the city – beginning perhaps as soon as next month – we look ahead at what might come next.

On this edition of Iraq Matters, we ask how this complex region, which has long been shaped by ethnic factions vying for power, will be governed as it rebuilds and repopulates. What pre-ISIS conflicts among these groups linger, and how will that shape the future?

We are pleased to have as our guest a researcher who has placed Mosul and the northern region of Iraq at the center of her academic career and can offer unique insight into its potential.

Christine van den Toorn is the Director of the Institute of Regional and International Studies at the American University of Iraq – Sulaimaniya. She has over 10 years of academic and professional experience in the Middle East and has published articles and reports in leading publications such as the Iraq Oil Report, Inside Iraqi Politics, Daily Beast and Niqash. Ms. van den Toorn has also conducted social impact assessments for international oil companies operating in the Kurdistan Region of Iraq and disputed territories, working with teams of student researchers from AUIS. She served in the United States Peace Corps in Morocco and holds an MA in Middle East History from the University of Virginia.

Listen as Christine shares her thoughts on ISIS’s entry-point into the region, who will govern after they are defeated, what the international community should be doing, and why IRAQ MATTERS.