In 2014, the Iraqi Yazidi community, a small ethno-religious minority residing mostly in the area of Sinjar, a mountainous region in Ninewa, northwestern Iraq, was subjected to a campaign of massacres, mass kidnappings and enslavement of women, boys and girls at the hands of ISIS. Between 2,000-5,000 Yazidis lost their lives and about 6,000 women and children kidnapped; about 3,000 of them remain missing. The survivors of the genocide fled mostly to areas under the control of the Kurdish Regional Government in northern Iraq and northeastern Syria. Although Sinjar was liberated from ISIS in 2015 and the surrounding areas were cleared by mid-2017, Sinjar remains largely depopulated; Yazidis displaced in 2014 continue to reside in poorly services camps, fearing or unable to return. To gain a better understanding of the factors hindering the return of the displaced and post-ISIS reconciliation, EPIC interviewed Hazim Avdal, a young Yazidi activist and survivor of the genocide who currently resides in Chicago. 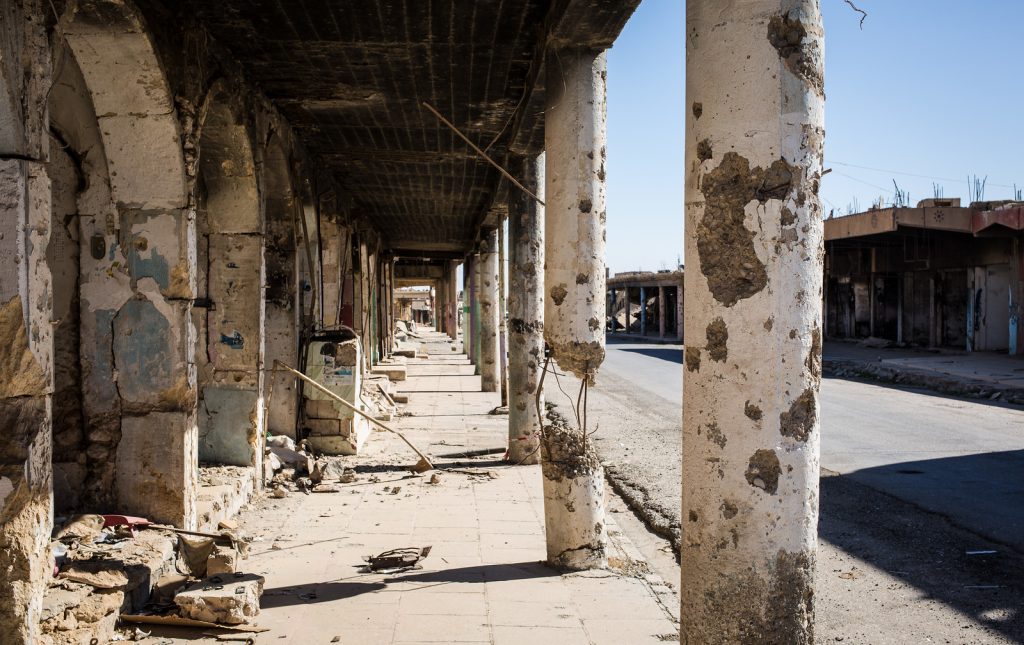 EPIC: Could you tell our readers a little bit about yourself?

Hazim: My name is Hazim, I’m 24-years-old, I’m a member of the Yazidi community of Iraq. Previously, I worked for the NGO Yazda for two years. I am currently in my second year of college at the University of Chicago, studying computer science.

Video on Hazim produced by the University of Chicago

What kind of work has Yazda been doing and what was your role in the organization?

I worked at Yazda in 2015-2017. The organization was launched in the U.S. in August 2014, and the branch in Iraq was established in January 2015 by a group of about 20 volunteers. I was one among them. Our initial focus was providing psycho-social support to Yazidi survivors of the genocide, particularly women who were enslaved by ISIS. The government was not helping them in any way, and it was just us and a few more organizations offering them support at that time.

Later we launched additional projects, such as a medical clinic in a camp for the displaced, a documentation project that interviewed survivors and witnesses of the massacres and crimes perpetrated by ISIS against our community all across Sinjar. This evidence was gathered for reports that we submitted to the International Criminal Court, the UN and other bodies. We also operated a local center that provided therapy to people who came out of captivity. Another project, named “The Golden Pen” aimed to preserve the Yazidi culture – our culture is mostly oral, so we started to write it down and to teach the oral tradition to young people in the camps. This project is particularly important because it counters ISIS’ effort to erase our culture.

The vast majority of [Yazidi] IDPs are living in a horrible situation: they have been living in tents for four years. There is electricity only for a few hours a day. It is very hot in the summer and very cold in the winter. They often do not have kerosene to heat their tents. Living in such conditions has immense impact on their mental health, especially after losing everything.

Where is your family living now? What are they telling you about living conditions there?

My mother and siblings live in Germany as refugees, they fled there after the genocide. I have one brother who lives in Dohuk, Iraqi Kurdistan, where he just graduated from college. One of my four sisters lives in Khanke IDP camp, near Dohuk. After the genocide in August 2014, our family fled to a refugee camp in Turkey. In 2015, we came back to Iraq, as the security situation improved and we wanted to be closer to our community. But the vast majority of IDPs are living in a horrible situation: they have been living in tents for four years. There is electricity only for a few hours a day. It is very hot in the summer and very cold in the winter. They often do not have kerosene to heat their tents. Living in such conditions has immense impact on their mental health, especially after losing everything – their home is gone, many of their family members are gone, their sources of livelihood are gone. Sinjar has been liberated in 2016 from ISIS, but we are not seeing any efforts by the government to reconstruct the area, clear it of mines and provide services in a significant way. Therefore, Yazidis cannot return to their homes.

Do you think that Yazidis would like to return to Sinjar? What would be the ideal solution as far as they are concerned?

There are many opinions regarding this among Yazidis themselves and among NGOs supporting them. Yazidis do want to go back to their homes; they don’t want to continue living in horrible conditions in these camps; they want to return to their homes and communities. Yazidis are very concerned about their safety: people do not trust the government that abandoned them in 2014. Who is going to protect them if they return? They worry about their future and want a long-term solution. It is possible that at first it will be safe, but then after a few years, the security situation will deteriorate again. The Yazidi area is surrounded by Arab villages, and many of the residents of those villages joined ISIS and were directly involved in the crimes they committed. So returning means living alongside those individuals.

Thus far, the government hasn’t done much to put former ISIS members on trial, to let justice take its course. Another concern for the Yazidis is that the entire region is destroyed. From what I’ve heard from my friends who visited my town, Herdan, on the north side of Sinjar Mountain, over half of the houses are completely destroyed. Even if people go back, they have no homes to return to.  They need help to rebuild their homes. This also applies to schools that are largely destroyed, there is no electricity – the grid line has been destroyed. The issues of safety, justice, reconstruction and restoration of services have all gone unaddressed, so Yazidis in general do not feel that they can return or that they will be safe if they return. 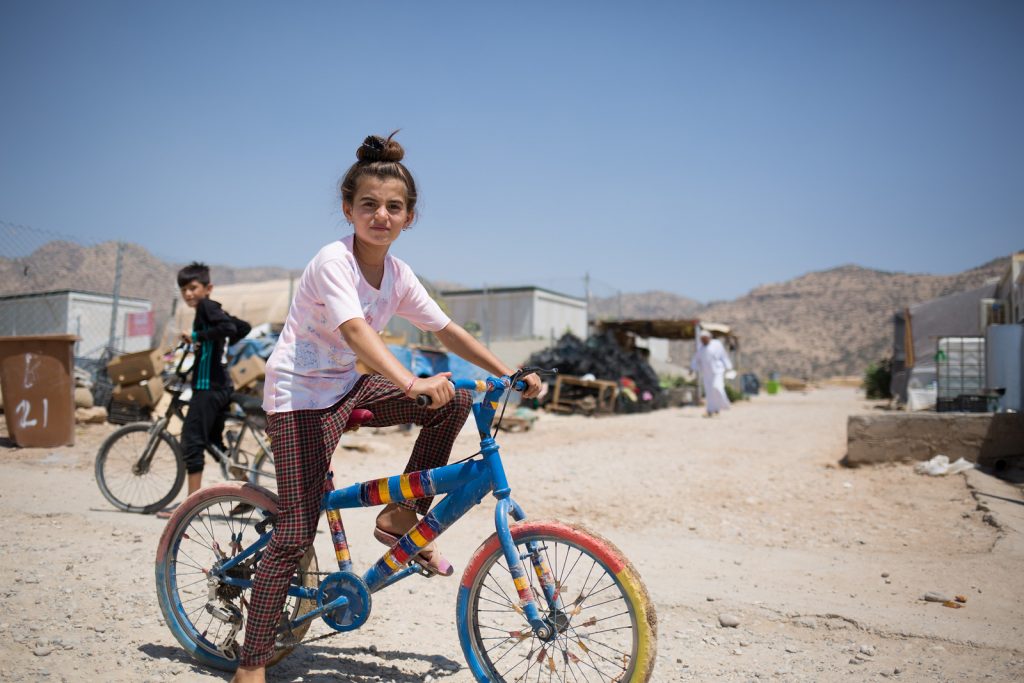 Yazidi girl in a camp for the displaced near Dohuk, northern Iraq. Photo: Tom Peyre-Costa/NRC

What do you think the United States should be doing to assist the Iraqi people and the Yazidi community in particular?

In the short-term, in the coming years, the U.S. should help people rebuild their communities and ensure service provision. But in the long-term they should focus on education, to impact the future of Iraq, to support it in a meaningful way. ISIS and extremist groups feed on ignorance and illiteracy. People who do not have access to education can be easily manipulated by extremist groups. Making education of higher quality more accessible to all Iraqis will go a long way to reducing the threat of extremism in the country.

To live in peace, we need justice. A person who lost his relatives to ISIS, how is he supposed to coexist with neighbors involved in ISIS’ crimes? Justice must come first.

What do you think are the long-term effects on the Yazidi community of ISIS’ genocide?

The mass murder and kidnappings have had immediate and direct effects, but these crimes also left a deep impact, a less noticeable one, on the culture of the community. This impact will be long-lasting and will take generations to materialize. The community has a strong connection to its land, all the holy temples and shrines are in Ninewa, in Sinjar, and in Baashiqa and Bahzani. Once you lose that connection, it can have a tremendous impact on the community as a whole. The community has been displaced from their homeland for years now, many of the shrines have been destroyed. ISIS wanted to kill individuals, but also to erase the culture and religion itself, which is why they used systematic rape as a tool to affect the ethnic composition of the group and destroyed shrines, to erase the culture. A similar patterns occurred in other genocides around the world. They also brainwashed young Yazidi boys and turned them into suicide bombers and ISIS fighters.

At the same time, something positive emerged out of this horror. Many communities in the Middle East are conservative, honor crimes are rampant, and rape is seen as something shameful. Yazidism is a closed community, and people would only marry each other. Those women who were taken by ISIS, according to the religious practice, were supposed to be excommunicated because they were taken by men outside the religion. Instead, the community decided to accept them. The Yazidi religious leadership issued a ruling saying that these women are part of the community and need to be welcomed back. All the victims who returned were taken to the temple in Lalish and met with Baba Sheikh, the supreme religious leader, and he gave his blessing, saying that you are welcome to our community. Overall, this had a very positive impact on the healing process of the survivors.

You now live in the United States and regularly interact with Americans. What are some common misconceptions that Americans have about Iraq?

Many Americans have a negative view of people from the Middle East, often labelling people as terrorists. They do not know how diverse the region is. Myself, for example, I am a victim of terrorism. But based on my origin, Iraq, I am assumed to be an aggressor and not a victim. People do not understand the complex dynamics of the region. I hope people will try to learn more and judge people by their character and understand their background.

Do you believe that Iraq’s various communities and ethnic groups can once again live in peace with one another? What needs to happen for all Iraqis to feel safe?

Iraq has so many diverse communities and each one has its own situation. I can speak about the Yazidi community. To live in peace, we need justice. A person who lost his relatives to ISIS, how is he supposed to coexist with neighbors involved in ISIS’ crimes? Justice must come first. People involved in ISIS’ crimes need to be put on trial. This can help people coexist again.