The current displacement crisis in Iraq did not erupt suddenly. It is the newest wave of a continual problem in Iraq. A 2009 report from the Brookings Institute noted:

“In fact, since the late 1960s, Iraq has produced the largest number of refugees and internally displaced persons in the Middle East with the exception of Afghanistan.”

The first “layers” of the displacement crisis date back to the 1975 Kurdish revolt,  Saddam Hussein’s relocation policies and atrocities against Kurds, and the Iran-Iraq War and the first Gulf war in 1991, provided the first “layers” of the current crisis. Before 2003, it was estimated that around a million Iraqis were displaced in the country, two thirds in the north of Iraq and one third in the south (Brookings, 10). From 2003-2005 an estimated 190,000 more people were displaced. By 2006, it was estimated 1.2 million people were displaced in Iraq. The February 2006 mosque bombing in Samarra began a two year civil war which resulted in 1.66 million people to flee within Iraq and an estimated 2.2 million refugees escaping to Jordan and Syria. By the Anbar crisis, nearly 1.1 million IDPs already existed within Iraq, with “… many of them [living] in slum-like settlements, with no clear government policy to address their future.”(IRIN)

Five to six  years after the displacement crisis of 2006-2008, Iraq and the international community had failed to find a solution to the nation’s 40 year problem. The addition of nearly 1.4 million (as of August 7th) displaced persons since the start of 2014, has exacerbated an ongoing issue in Iraq. For the latest numbers, please visit IOMIraq. Although the United Nations Strategic Response Plan (SRP) is now overfunded, finding a solution to the displacement crisis will need more resources and a sustained commitment. 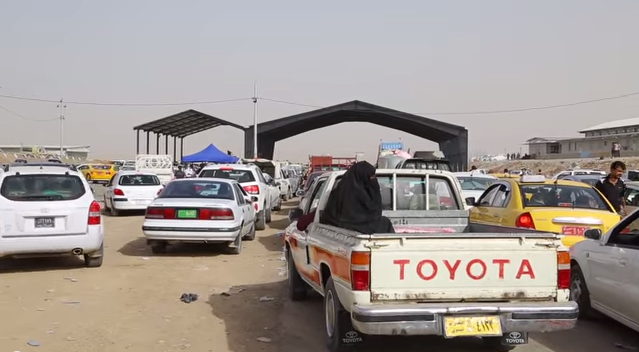 While most of Iraq’s IDPs can be found in the Kurdistan region, Anbar and southern Governorates, the displacement is widespread and fluid throughout the country. UNOCHA reports that there are 1,231 known IDP locations across Iraq.

Many of the IDPs experience multiple displacements or continue to move around for a number of reasons. First, the dynamic conflict environment, which expanded from its initial areas of Anbar and Ninewa, has pushed into areas in which Iraqis sought refuge. Fighting in Sinjar uprooted many Yazidis and other minorities that had already been displaced from Tal Afar. Similar fighting later in the week emptied two of the largest transit camps across the Kurdistan region’s border (Khazair and Garmawa).

Secondly, some cannot afford  to live in other areas. The cost of living in places like the Kurdistan region is much higher than central Iraq. UN OCHA noted in a recent update that some IDPs from Anbar are returning due to their inability to manage the high cost of living in Erbil, Dahuk, and Sulaymaniyah.

Those who were able to flee the conflict in the Nineveh and Salah-Al-Din Governorates, primarily fled northeast to Dahuk, Erbil, and Sulaymaniya, governorates in the Kuridstan Region of Iraq (KR-I). About 500,000 Iraqis flooded into the Kurdistan region in early June, yet in recent weeks the KR-I has tightened access. Checkpoints are now regularly closed, leaving displaced persons waiting for periods up to five days.

The closures are a product of security and financial concerns of the KRG. With spending to the KRG frozen until the 2014 Iraq budget is passed, the KRG has a diminished capacity to take in such population flows. Security concerns are likely the result of ISIS tactics in using Sleeper cell units activated in cities, something seen in Mosul.

As problematic as the closures are, it may be the practice of selective accommodation that’s the more concerning issue. Rights groups are indicating that Kurds and Christians are able to pass checkpoints easily, “whereas Sunni and Shia Arabs and Turkomen are stopped or sent to temporary holding sites.” While this may be the result of discrimination, the resident sponsor program of the KR-I is contributes largely to this phenomenon. Most families are only allowed to cross into Kurdish territory if they have a resident sponsor. Given that most of the residents in Kurdistan are Christians and Kurds, the practice takes on a discriminatory appearance.

Unfortunately the practice has serious consequences for those denied access, who have moved to the Garmawa or Khazair displacement camps. The Khazair camp, lying 100km west of Erbil and 53km east of Mosul, currently hosts about 1,500 displaced people . There’s little in the camp aside from UNHCR tents and bathrooms. Paired with heat, sparse access to food, water and electricity have caused many families to move towards Urban areas and away from the Khazair camp. According to the UNHCR, there are plans to relocate transit camps like Khazair inside Erbil, however the transition is likely to take a month.

An open and clearly articulated border policy by the KRG will be necessary for an effective response to the displacement. On the heels of a $500 million donation from Saudi Arabia and international pressure, the KRG may be more open to allowing IDPs into the region.

The displacement within Anbar (highlighted by Taif Jany back in January)  marked differences with that of the Nineveh province. Of the over 558,648 (June 25th numbers) displaced by the conflict, it appears that approximately 400,000 of them remain in Anbar, the most in any governorate.

While thousands are moving to the KR-I region, Baghdad and other areas in Anbar, the majority are stuck facing hardship under ISIS and the Iraqi government’s use of barrel bombs.

ISIS’ invasion of Mosul and the subsequent conflict has sent predominantly Shia muslims to the southern provinces. The concentration of Shia muslims in the south has occurred in two movements. The first was initial movement of persons from central Iraq or the Anbar province into the southern governorates of Najaf, Babylon, Kerbala and Wassit.

The second movement is occurring from transit camps in the north. According to IRIN, Shia muslims are being taken to a transit site close to Erbil to wait for flights out of Erbil International Airport. IRIN found that many of the Shia muslims were transferred from the Khazair camps to the Baharka camp, just outside of Erbil. These flights are often taken to cities like Baghdad and Najaf.

Currently the number of IDPs in Baghdad and the surrounding governorates continues to increase, with many of these persons accommodated in mosques and collective centers. (UNOCHA: Approx 3,060 families from Ninewa and 116 from Anbar have been displaced to Najaf) This trend may increase as around 694 families from Mosul, Anbar, Salah al-Din and Diyala have already reached the area.

Host Families: Families throughout Iraq have generously accepted fleeing families, but are facing increasing constraints on their ability to do so. As the cost of living in Kurdistan and the southern governorates remains high, cash assistance is needed for IDPs and their host families. Without it, many IDPs may have to return to dangerous areas in central Iraq.

While these accommodations may work temporarily, finding new shelter solutions is a pressing issue. The most recent UNOCHA updates states that 600 schools continue to be used for IDP activities, occupying space that will soon be needed for children as they return to school in September.

To respond to the crisis the UNHCR is working with government authorities to identify potential locations to which IDPs can be moved. Once collective centers are identified, organizations will try to provide rental support for IDPs and relocate IDPs to the centers when they are ready. (Shelter Working Group Meeting Minutes, July 16th)

Displacement Camps: The remaining IDPs live in displacement camps either in the southern governorates or near the Kurdistan Region of Iraq. The most prominent of which (mentioned above) is the Khazair Displacement Camp: The camp, located on the border between the Kurdistan Region and Iraq and 30km east of Mosul, hosts around 5,000 people. According to a July 3rd report from REACH, almost half of the IDPs at Khazair were there because they had been refused entry into Kurdistan.To see a map of the displacement flow to the Khazair camp click here.

The Baharka Camp, an old warehouse that was used as a transit site for refugees in August 2013, has been temporarily housing IDPs who were waiting for a flight to reach the south of Iraq. In spite of its initial use, the camp is taking on more IDPs not in search for flights. For more see REACH Initiative’s most recent report on the camp.

The Garmawa Transit Site, managed by the Danish Refugee Council (DRC) in partnership with the UNHCR, was established on 13 June 2014 for IDPs entering the KR-I. The camp primarily hosts those displaced from Mosul.

Update: UNOCHA reported that by August 8th, both the Khazair Camp and the Garmawa camp were empty due to fighting nearby.

Humanitarian responders face four primary challenges in dealing with the current displacement crisis. First, IDPs are spread throughout the country, contributing to access and logistical challenges in helping. According to the Assessment Capacities Project (ACAPS), IDPs have been identified in 17 out of 18 governorates in Iraq.

Secondly, movement of IDPs is fluid in this crisis. Poor camp conditions, closed borders, and ongoing violence keep displaced persons from staying in one place. OCHA reports that there are 11,231 known IDP locations across Iraq. Ongoing first and secondary displacement makes aid distribution and tracking difficult.

Thirdly, over half the displaced persons are urban based.  Humanitarian organizations often struggle to register IDPs as many are absorbed into cities. Registration and aid distribution is easier in collective centers or displacement camps.

Finally, access for humanitarian actors is restricted. Anbar, Diyala, Salah al-Din, and most of Ninewa are difficult to access at this moment. Without improved access hundreds of thousands of refugees in places like Anbar struggle to receive enough water, shelter, and food.

Iraq’s displacement issue did not begin suddenly with ISIS’ movement into the Anbar province, nor will it end quickly once the fighting subsides. With over 1.4 million displaced, this is a problem that not even the Saudi donation will solve. Its resolution requires a long-term commitment to Iraq’s development and humanitarian needs by the international community.