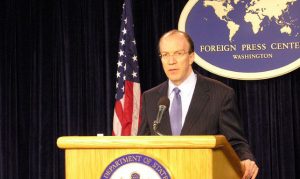 Aside from the social and political costs that ISIS has wrought on Iraq, intense damage to cities and villages leaves the Iraqi people and their government with the massive task of rebuilding critical infrastructure. The reconstruction process presents an opportunity to bolster Iraq’s existing civil society, empower local populations, and foster new relationships between policymakers and their constituencies. Yet serious challenges – including economic crisis and government inefficiency – could handicap this effort as they did in the years following the 2003 U.S. invasion. Only with serious international engagement in a post-ISIS Iraq, both in terms of humanitarian funding and political guidance, can these obstacles be overcome – and the knowledge for how to do so effectively may be close at hand.

On this edition of Iraq Matters, we welcome Stuart Bowen, who served as Special Inspector-General for Iraq Reconstruction from 2004 to 2013. As the “taxpayers watchdog” in Iraq, Mr. Bowen oversaw more than $60 billion in U.S. funds intended to aid reconstruction after 2003. His oversight led to more than 120 convictions for fraud and other crimes, saved the government more than $2 billion, and contributed to a new set of industry standards in administering reconstruction assistance.

Listen as Mr. Bowen discusses the critical importance of eliminating corruption if there is to be sustained peace and development in Iraq – and the consequences that will occur if corruption is not addressed. He compares Iraq’s current situation with the climate he worked through in the decade after Saddam Hussein and offers advice for those in the international community who will provide much needed reconstruction assistance.

And for more on Iraq’s reconstruction, listen to our episode with Dr. Mustafa al-Hiti, President of the Reconstruction Fund for Areas Affected by Terroristic Operations, referenced by Mr. Bowen.