Campaign Update: Put Iraq Back on the Agenda

In his recent speech to the UN General Assemly, President Obama said, “Iraq shows us that democracy cannot be imposed by force. Rather, these objectives are best achieved when we partner with the international community and with the countries and people of the region.” While we are happy to hear this sentiment, it is urgent for us to remind President Obama that it isn’t enough to simply say it. The United States must follow through with action that will bring about meaningful change in Iraq.

Since our last update, you’ve helped us gain more than 1 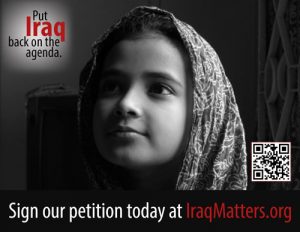 ,000 new signatures in support of renewed diplomacy and humanitarian action for peace in Iraq! Now we need your help to double that number. Please take a minute to share our petition with your family and friends via the convenient sharing tools on our Change.org petition page at: http://www.change.org/petitions/president-obama-put-iraq-back-on-the-agenda

Alternatively, you can also simply share the link above. If you and every supporter invites just 2 or 3 friends to join us, we’ll reach our goal of 10,000 signatures in no time! Among the many reasons to support our campaign, you can share the following facts:

While the world is divided about how to end the war in Syria, there should be no disagreement about the urgency to do more to help millions of innocent civilians — most of them children aged 17 years and under — who have been forced to flee their homes, and support neighboring countries coping with the influx.

Thank you for your continued support!