If you are like me and you grew up in a democratic society, it can be easy to take democracy and all its trappings for granted. But recently I’ve been thinking a lot about what “democracy” means as a concept, a practice, and a system of government.

In particular, what does it take for a democratic society to function and be sustained? And how does a traditional tribal society (from which, in human history, we have all come) or populations overcoming dictatorship make the transition to democracy? Iraq’s movement towards democracy has been difficult to dissect. Iraq is a resource-rich, pluralistic and multi-ethnic country with over 27 million inhabitants. Its recent tumultuous history of successive wars, brutal dictatorship and punishing sanctions has left the country’s infrastructure, government provided services, and institutions in a fragile and vulnerable state. Not to mention that power consolidation has been an unwelcome, but persistent guest in Iraq’s political sphere.

However, Iraq’s newly forming civil society has become in a relatively short time an important player in advancing democratization.

I was recently given the privilege of talking to members of the Middle East and North Africa (MENA) program team of the National Endowment for Democracy, a U.S. non-profit grant-making organization created in 1983 to strengthen democratic institutions around the world. We met at NED’s offices in the heart of Washington, DC. Around the table sat Rahman Aljebouri, Senior Program Officer; Hanane Zelouani Idrissi, Assistant Program Officer; and Geoffrey King, Assistant Program Officer. (You may remember Rahman from this Ground Truth Project interview with EPIC in 2009.) Together they work on NED’s programs supporting civil society organizations working on human rights, accountability, and democratic reform in Iraq, Yemen, and the Gulf. 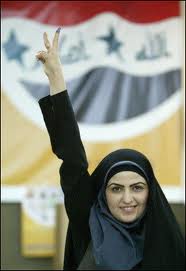 With modest funding, NED supports nearly 50 mission-driven local Iraqi organizations working to consolidate democracy in their country. Founded in 1983 under the Reagan administration, the Endowment is a private, non-profit organization dedicated to the strengthening of democratic institutions across the world. The Endowment is steadfastly bipartisan: it was founded with bipartisan support and was closely followed by the creation of the International Republican Institute (IRI), the National Democratic Institute (NDI), and the Center for International Private Enterprise (CIPE), all of which were joined by a labor institute already in existence, known as the Solidarity Center, which ensures political balance. The Endowment receives its funding annually through a congressional appropriation.

Behind the founding and the direction of the Endowment is the idea that freedom is an aspiration shared by all, and a democratic government is the best way to ensure that aspiration. As their Statement of Principles and Objectives (1984) states, “Democracy involves the right of the people to freely determine their own destiny.”

With issues of universal human aspirations on my mind, I made my way to the National Endowment for Democracy.

This interview was not only enlightening and informative, but also pretty exciting! In my enthusiasm, I dove – headfirst – into an unprecedented personal opportunity by asking my most difficult question first. What do you believe is at the heart of democracy?

A democratic society is a place where your opinions count and institutions of governance work; where there is accountability and clear rules of the game; where people are free to speak their mind, and there is a legal framework that helps them speak their mind. You need a healthy political system, a vibrant civil society, a strong labor movement, and a private sector; the combination of all will produce a place where people are respected, heard, and safe. A place where people can live their everyday lives without fear. -Rahman Aljebouri, Senior Program Officer: Middle East & North Africa

Democracy means that people’s opinions and their aspirations are taken into consideration in a respectful and accountable way. It means governance, rule of law, and having institutions and a political process that assure these are upheld. -Hanane Zelouani Idrissi, Assistant Program Officer: Middle East & North Africa

For me, the core concept of democracy is that a people collectively decide their own political destiny. -Geoffrey King, Assistant Program Officer: Middle East & North Africa

How does this translate into practice in Iraq? In Iraq, the Endowment focuses its small grants to local, non-governmental institutions working on human rights, government accountability, and legislative advocacy. The Endowment has a truly unique approach: rather than design its own programs, the Endowment responds to the self-declared needs, aspirations, and demands of local organizations. They place emphasis on the institutional development of these local actors to consolidate the long-term sustainability of Iraqi civil society. As a result, the Endowment’s MENA program has room for adaptation and can change its strategies as the issues evolve, while encouraging the democratic process. Their model promotes the ideal of a vibrant, locally driven Iraqi civil society.

In short: the Endowment’s dynamic and flexible character allows it to change its strategies with the changing needs of the Iraqi people.

One of the hallmarks of democracy is that there is room for debate and a range of opinions, and I certainly have mine. But in democracy promotion, impartiality and careful balancing are critical. The Endowment works with organizations from lots of different communities and political tendencies, and always avoids “picking a side” with either funding or advocacy. As Hanane explained it: “The key to our neutrality is that they are coming to us.” That is to say, the Endowment doesn’t cherry pick their candidates based on a preconceived set of ideals. Applicants approach the Endowment as a source of funding, and the Endowment is able to grant or deny funding based solely on the applicants’ potential to promote democracy.

I look at the work we do as means driven rather than ends driven. We are trying to assist these groups in connecting the dots, to facilitate their work on the democratic process. As long as a strong civil society rooted in international norms can be a watchdog for the democratic process itself, they will be improving their societies to whatever end they see fit. To us, perfecting the means is the end game. To what political end? That’s up to them. -Geoffrey King

Democracy in Iraq is starting to take hold, but Rahman and others at the Endowment still do not consider Iraq a democracy. Iraqis still lack an independent media, security, and a culture of democratic institutions. Civil society organization themselves are increasingly threatened by a lack of funding and political restrictions, and sometimes struggle to remain mission driven. In certain regions, political leaders distrust civil society. Visa problems and language barriers present significant roadblocks to finding funding from the international community. Furthermore, because there is such a high demand for support from the Endowment (300-400 applications a year!) coming from Iraq, sometimes it can be a challenge to strategically identify where to intervene and what to prioritize.

Despite the challenges, Iraqi civil society has made inspiring strides. In recognition of that progress, the Endowment has changed its tactics. In the immediate post-invasion years, Iraqi civil society focused on civic education and humanitarian assistance. Recently, the vanguard groups have shifted to government accountability and legislative advocacy. Rahman, Hanane, and Geoffrey highlighted examples of the strides made by Iraqi civil society over the past few years. Human rights organizations have moved from simply educating people about their rights to monitoring rights violations. A few think tanks have emerged. Activists are moving from protesting in the street to advocating policy. Groups are fighting for a legal framework for independent media. They have seen a lot of coordination across the country and across sectarian divides. All these different sectors and institutions have come together with one goal: building a democratic country.

We have been seeing a lot of sectors working together – this is an important part of democracy… In the last 10 years, they have made 20 years of progress! -Rahman Aljebouri

As far as the Endowment is concerned, there is plenty of room at the table for Iraqi youth. Several of their programs have been aimed specifically at youth, including one which teaches emerging leaders how to rise to meet Iraq’s challenges while maintaining their local identities and cultures.

Although largely ignored in the media, Iraq has not been immune to the Arab Spring. According to Rahman, Iraqi protesters have been focused on reform, rather than revolution. He explained that numerous youth leadership programs have been aimed at mobilizing the community. Geoffrey King had this to add:

Because the Arab Spring brought many of the youth who were interested in political or economic reform to the squares, it’s been easy, in some cases, for organizations to engage with these youth and identify their needs. Whereas the youth might go out and demonstrate because they have the energy and they might even have the vision of what they want for Iraq, they generally don’t have the skills to mobilize and, for example, work with a team on an advocacy campaign. This is where our grantees step in. -Geoffrey King

With the withdrawal of US forces, Iraq’s burgeoning civil society activists need a lot of financial and moral support. We have a moral responsibility to keep engaging these people. They are fighting to improve their countries and we need to believe in them. Iraq is not democratic yet. We need to listen and guide its institutions, and democracy will come. We need to give it the right environment and help.

So, to answer my earlier question. What do I believe is at the heart of democracy? I believe that democracy means having a level playing field; as citizens, we are all equal under the law. Democracy means a meritocracy in which your education and opportunities will be a reflection of how ambitious, hard-working, and intelligent you are. It also means that freedom of speech, freedom of religion, and freedom from discrimination. It means that someone who comes from nothing can one day have everything.

What does democracy mean to you? No, really! Comment below or tweet us your answers at @enablingpeace or join our conversation at www.facebook.com/epicusa. We’d love to hear from you.