Key Takeaways: Parliament Swears In 64 New MPs; Coordination Framework Divided Over Government Formation; Kadhimi Visits Saudi Arabia And Iran – On June 23, Iraq’s Parliament convened an extraordinary session in which 64 new MPs were sworn to replace MPs loyal to Muqtada al-Sadr who had resigned on June 12. On June 24, Asaib Ahl al-Haq leader, Qais al-Khazali, said it was difficult to form a stable government without the Sadrists, and called for “a political agreement on redoing the elections” under a new law and electoral commission. Khazali’s position is at odds with that of Nouri al-Maliki, who wants to take the lead on government formation regardless of Sadr’s participation. Press reports say Maliki has a strong interest in becoming PM again and believes that the risks of excluding Sadr are exaggerated. On June 25 and 26, PM Kadhimi visited Saudi Arabia and Iran, where he met with Crown 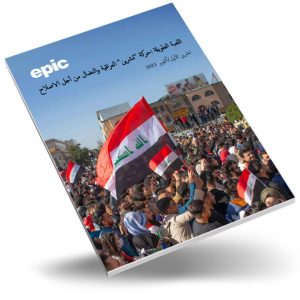 The Tishreen Report in Arabic is Here!

If you want to understand the Tishreen movement, you need the best information, and insight from the people who are part of it. Through focus groups with Tishreen and Iraqi Kurdish activists, a national public survey, and dozens of detailed interviews, this report offers an unmatched, detailed inside look into Iraq’s ongoing popular movement for reform. The report is uniquely valuable because of our close relationships with Iraqi activists and peacebuilders on the ground. From the beginning, we wanted it

While Iraq’s next government may be “business as usual,” the election has planted the seeds for change

Originally published by The Middle East Institute – November 1, 2021 Iraq’s Oct. 10 election may be more consequential than its immediate results suggest. Some of the subtle facts and dynamics surrounding the election point to interesting trends and possibilities, more so than the headline-grabbing expansion of Muqtada al-Sadr’s power in the Iraqi legislature, or the losses suffered by candidates representing Iran-backed militias. It may seem paradoxical at first, but this election could provide the conditions for a future rebound

The nonviolent struggle for democratic reforms in Iraq is now well into its fifth month of sustained protests against the government. We talk with Hayder Hamzoz, founder of INSM (Iraqi Network for Social Media), a network of Iraqi bloggers and citizens journalists. Hayder shares his perspective on how the protests work and the critical role that social media activists are playing on both the physical and digital front lines of Iraq’s protest movement.

We enhance understanding so that Iraq’s story can be shared and understood in the United States and around the world. 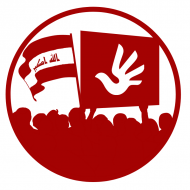 An inside look at Iraq’s protest movement for reform and the struggle for popular sovereignty and human rights. 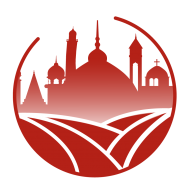 A unique project that promotes public dialogue on critical issues related to stabilization and peace in Ninewa.

View all our Projects in Iraq…